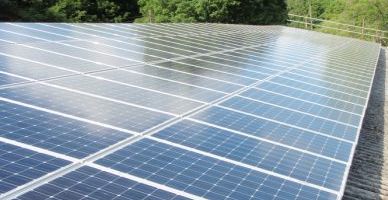 Known commonly as solar panels, or just PV in the industry, they are the large flat, black glass panels that go on roofs to convert sunlight into electricity. PV cells come in a variety of shapes and colours, from roof and wall mounting panels to grey “solar tiles” that can look like roof slates. There are even panels available with the solar cells spaced apart to allow some sunshine through for conservatory roofing, for example.

The technology behind them is improving at an impressive rate allowing them to become more and more efficient and effective at generating electricity regardless of what you might think about the UK weather! They also are covered by permitted development meaning that you can broadly speaking stick them on a domestic roof without having to seek planning permission – although see below for more details.

Solar photovoltaic (PV) cells convert sunlight into electricity, which can be used to run the appliances in your home or business. They only need daylight and still generate some electricity on cloudy days.

The output of solar PV generators is measured in kilowatts peak (kWp) which represents the amount of energy they produce in full sunlight. It is this measurement which is used to calculate how many solar panels are required for a building.

Most systems use an inverter which converts the output to AC which is needed for domestic use. They are also connected to the grid which is important as it allows electricity to be ‘imported’ when the system isn’t producing enough power (e.g. at night) and ‘exported’ when your system produces more electricity than you need. The exported surplus electricity is sold back to the grid at 3p/kwh under the Feed-In Tariffs.

Where it works best

Solar photovoltaic systems need only daylight so can work in most locations. Because the output from photovoltaic cells changes based upon the amount of daylight available, they will always be more efficient when placed in unshaded areas, facing at least partly South–facing; though any direction in the southerly arc between East and West will work typically at no less than 85% efficiency. Output is dependent on the strength of the sunlight, not on the outside air temperature.

The inverter can be mounted, typically on a wall inside your property, anywhere near the solar panels or the household consumer unit. It will usually include a meter to show how the system is performing. Remote ‘repeater’ meters are available if the inverter is in a less accessible location such as an attic.

How much energy it produces

Solar PV systems can be supplied in virtually any size, and their output will be related to the area of the solar panels. An area of one square meter typically can house 100 to 180 watts peak of PV capacity.

The productivity of solar PV does not vary greatly across the UK with typical levels between 1100 kWh per square meter in the South West, to 800 in the Scottish Highlands. Local variations are small and we have reliable meteorological records created over many years, so can predict annual outputs and the probability of year-to-year variations quite accurately.

Solar PV is an almost maintenance-free renewable energy source, because it is based on solid-state semiconductor technology. The inverter is designed to operate automatically to optimise the output of the system.

Most roof-top sloping systems will clean themselves in the rain which means that we will have very clean PV in this country! We do recommend a service visit once a year to check on the performance of the system and thoroughly clean the panels if accessible.